For our MEMORIES ISSUE we would love you to take us on a tour through your childhood and teenage years, tracing the experiences that shaped you as a person.
Oh, where should I start? I moved around a lot. I was born in Wales, and then moved to London when I was one year old, moved to Greece until I was four and then I came back to the UK and stayed there for a longer time. So my childhood was mainly spent in a small village in Wales in the countryside.


Do you have any memories of the time in Greece?
A little bit. My parents divorced when I was 4, that’s why I moved back, so I remember that a little bit. Not in a negative way, just more like missing my dad at that time and then we moved to this funny little village and I remember always trying to hang around with my sister and her older mates. And them not really wanting me to be there. Later, when I was 16 I moved back to Greece and those two years, from 16 to 18 years, were very important for me, I kind of changed quite a lot as a person. I was in an environment that was completely alien to me. It was the first time I went to a school where there were boys, mixed-education, and it was very different because I was living with my dad and I hadn’t really lived with him before, and with my grandma, who was 85 at that time. It was a very positive experience, but my dad was very strict so I wasn’t able to do a lot of things. 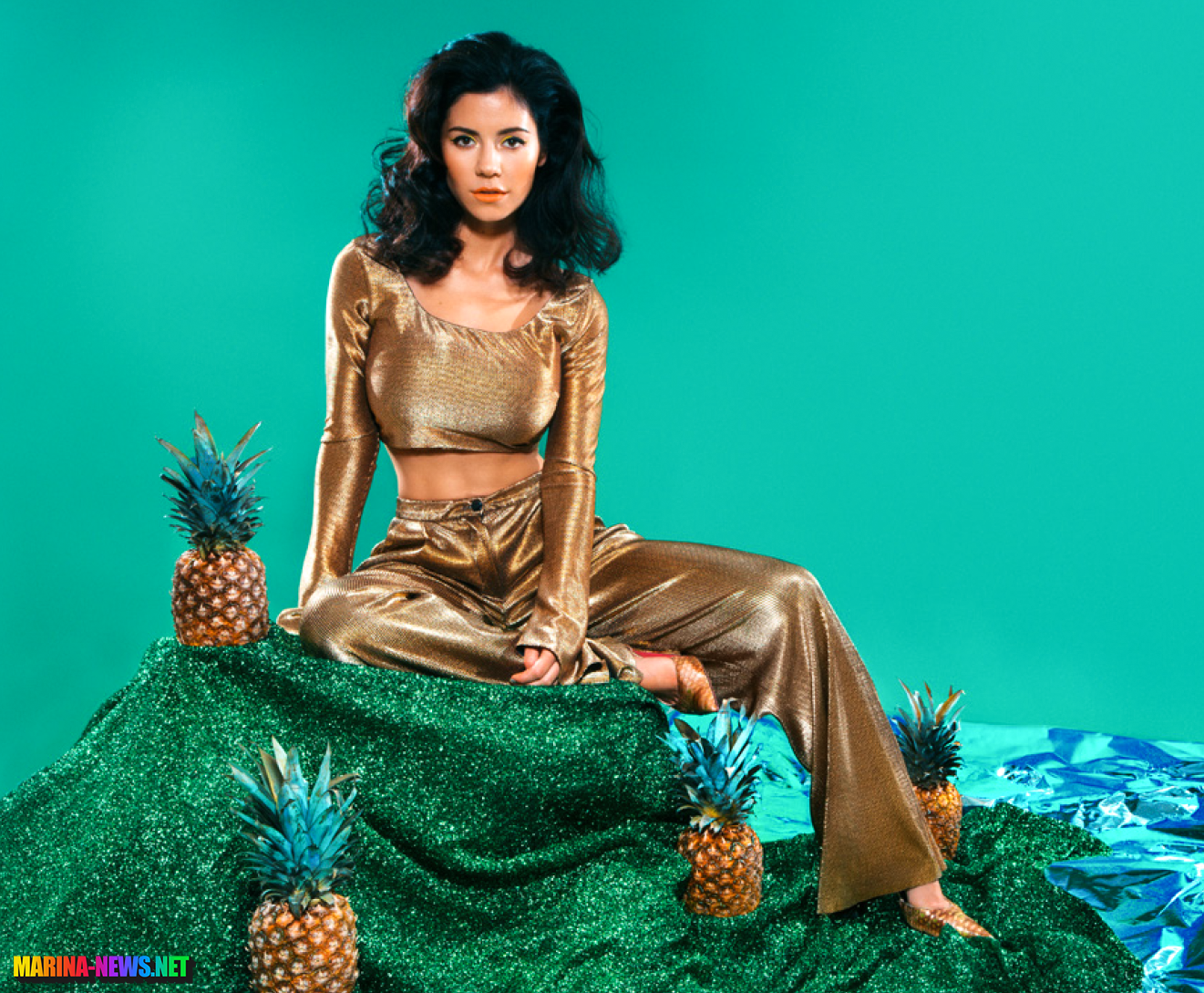 Do you remember any moments of teenage rebellion?
Yes, I do! Like two weeks after I arrived, I made all these new friends. In Greece you go out really late, so you leave at midnight and you come back at seven in the morning. And I was going to this club with my friends and my dad wasn’t home so I had to lie to my grandma to let me out and she did not approve at all but I left anyway and came back the next morning at 8 am and got a massive, massive bollocking, a big telling off.

It was around 15 that I really knew deep inside me that I wanted to be a performer and songwriter."

Were you ever grounded?
No, it was more just extreme moodiness in the house, it’s almost the same as being grounded. These are very vivid memories for me.


Is there anything about your parents you see in yourself?
Well, I’m like my dad the most. We are both extremely stubborn, very single-minded and kind of determined and we both have the same sense of humor. Whereas my mum is very relaxed, very non-judgmental, quite a peaceful person. So I hope I’m somewhere in between the two.


What are your most vivid musical memories growing up?
I think my first musical memories were around seven or eight years old with Dolly Parton’s “Jolene” and Annie Lennox’ “Sweet Dreams”. That’s what my mum played. And then, when I started to get my musical taste around ten years old, I loved No Doubt, and Britney Spears and Madonna – that was when I was like 14. Very pop actually, very commercial. And then it kind of changed when I was 19 or 20, when I started to listen to much more alternative female voices like The Distillers, I was obsessed with Brody Dalle, Shirley Manson, P.J. Harvey, Fiona Apple. It would be quite a varied soundtrack... 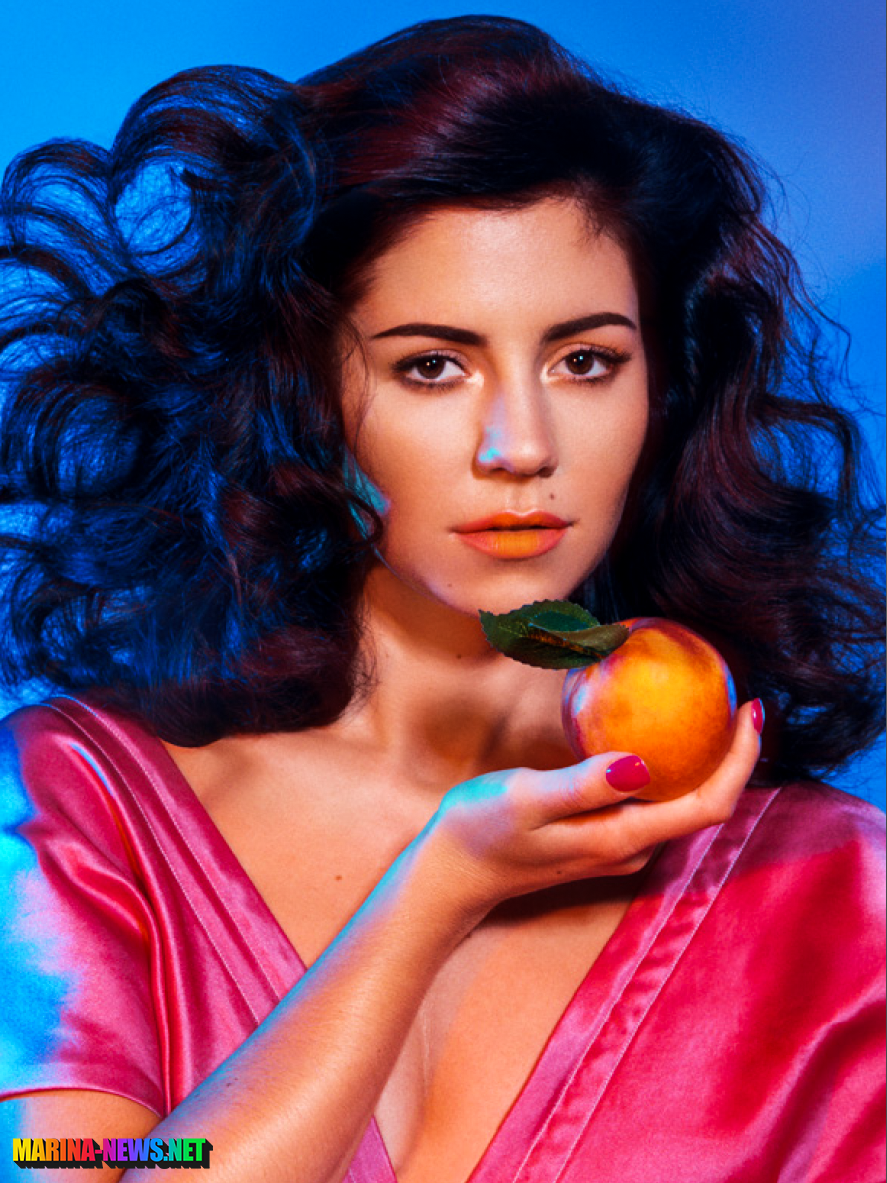 Any particular songs you remember first connecting emotionally to?
I liked “Don’t speak” by No Doubt. I related it to a boy that I’d fancied at that time. I got so sad, so so sad. And it’s hilarious to think of it. Because now as a musician, if you see really young kids relate to music you wonder what is going on inside them, how they process their emotions.


Did you and your friends all share the same taste or did you ever feel the pressure to like what they liked?
Not really, no. Because in Wales and not growing up in a city my musical taste wasn’t that cool or current. Also it was pre-internet, so the way that you digested music was completely different. Plus there was no kind of nightlife near where we lived.


Looking at the whole development of the internet and how differently people are growing up now...
I’m so happy that I experienced life without that. It seems to have changed the way people communicate and relate to each other. And maybe it’s not a bad thing but I’m happy that I experienced normal friendships and especially going to school as well without all of that social media pressure. Because being 14 years old is bad enough without it.


When did you get interested in making your own music?
I think it was around 15 that I really knew deep inside me that I wanted to be a performer and songwriter. But I didn’t actually write any songs until I was 19, so really late actually.


What were your first experiences performing live?
It was really horrendous, so terrifying. A bit of a mess but I kind of threw myself into it, I just wanted to do it so badly and I knew that I was really lacking in experience. So I’d go to this open-mic night on my own. I barely played the keyboard I bought myself the week before and then I played a little gig. I just had to do it. And I also knew that my music at that time had a long way to go, but that’s how you learn. You just have to do it and practice. Between then and getting signed it was 4 years, so I continued to do gigs but also I started to produce my own stuff on Garageband on my Mac. I went to several universities to get student loans to live off, so I wouldn’t have to work as a waitress anymore. It was quite a long route. 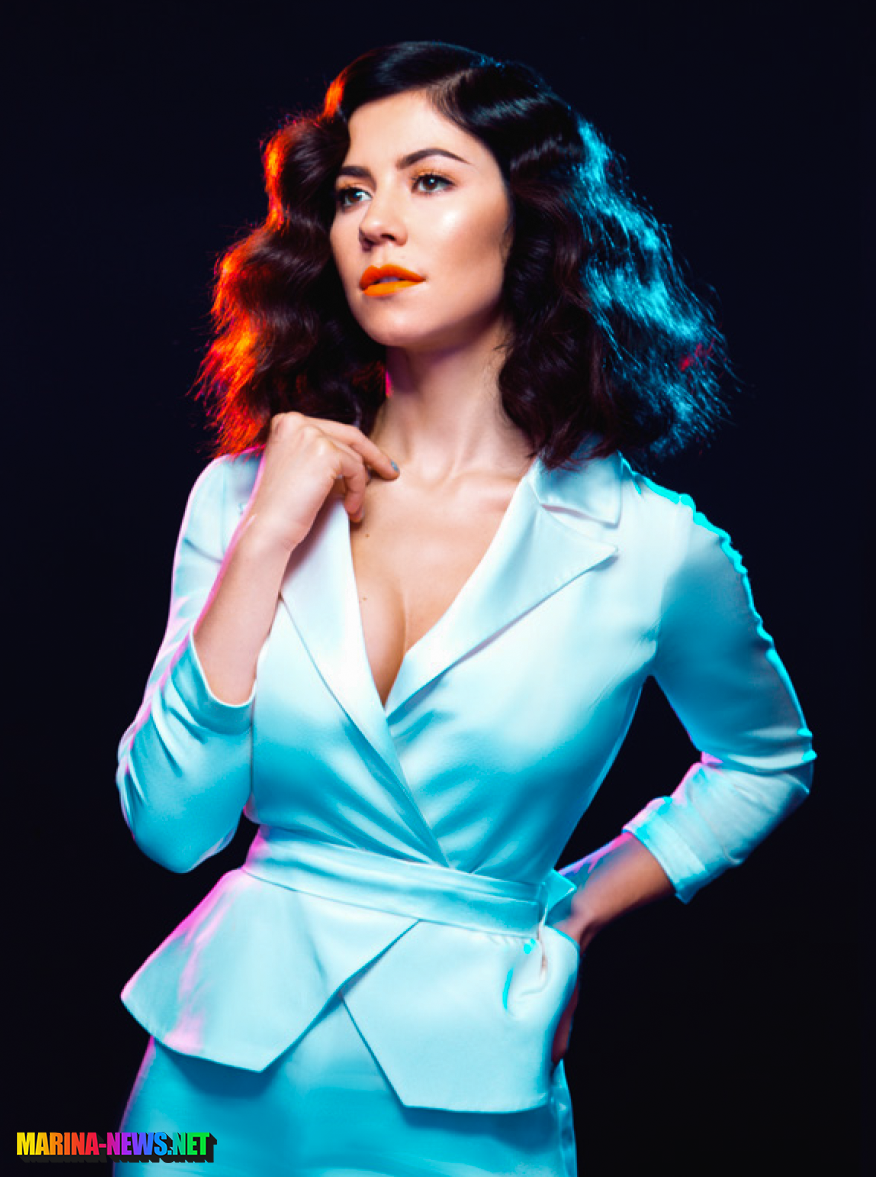 What did it feel like getting signed after those four years?
I felt relieved, so relieved, because I had no money left and it took four months from my label offering the deal to me signing it because of lawyers and stuff. And all that time you’re like “is it gonna happen? Is it gonna fall through?” I was definitely pessimistic. I never wanted to hope for the best in case I was let down. Now I don’t really approach things in that way, but at that time it was just like “don’t get too excited until things happen”.

There is always gonna be pop that is really light and trashy and there is also going to be a hunger for real music that touches you deeply and makes you think and relate to it."

Remember any big “this is getting real” moments in your career?
I think when I got a number one album in the UK!


What was the first thing you did when you saw you made number one?
I was in a pub and I had a nice pint of beer to celebrate. Recently there have been lot good things happening, I found out about 3 months ago that I sold over 2 million singles of Electra Heart which was very nice. But it’s weird because those things they do matter to you, but it’s not really what you do it for. So it’s kind of a cherry on top.


Was creating some kind of onstage-persona a conscious process for you?
I don’t think it was. Maybe for some people it is, I think it’s more of a cartoonized version of yourself. Now I don’t feel like that anymore, but maybe on my first album I did.

How has growing up changed the way you see yourself in the business?
I think the experience gives you the opportunity to learn what you do like and what you don’t like. You very quickly learn about who you are.


How do you feel about the state of pop music today?
I think we are in quite a healthy state. There are a lot of options for people, no matter what age you are. For example with Lorde – that was really refreshing, because I imagined if I had been a teenage girl it would have been fantastic to have somebody like that in our environment or cultural landscape. So I think it’s in a quite healthy state. There is always gonna be pop that is really light and trashy, it is just a good song to dance in the club and there is also going to be a hunger for real music that touches you deeply and makes you think and relate to it. So I think we are in an “OK” state (laughs).


Have you ever struggled with how differently female and male pop artists are being perceived?
I don’t know. I think the tough thing for female artists is that they love to play with visuals and their identity in a way. But they also want to be taken seriously and that’s really hard because our visual sense is so strong that if you see someone who looks like a cartoon then you think of them in a childish, kind of funny way. Whereas, if you want to be a serious musician and you are just wearing a white t-shirt and some jeans, they are like “she is very respectable”.


Did you ever struggle trying to be “taken seriously” as a female artist?
Definitely. I think I’m over it now, maybe because I’m further away from that kind of pop candy world. I suppose you just accept it or you have to keep on labouring your point. You know, the fact is that I enjoy creating visual art so I don’t care so much. 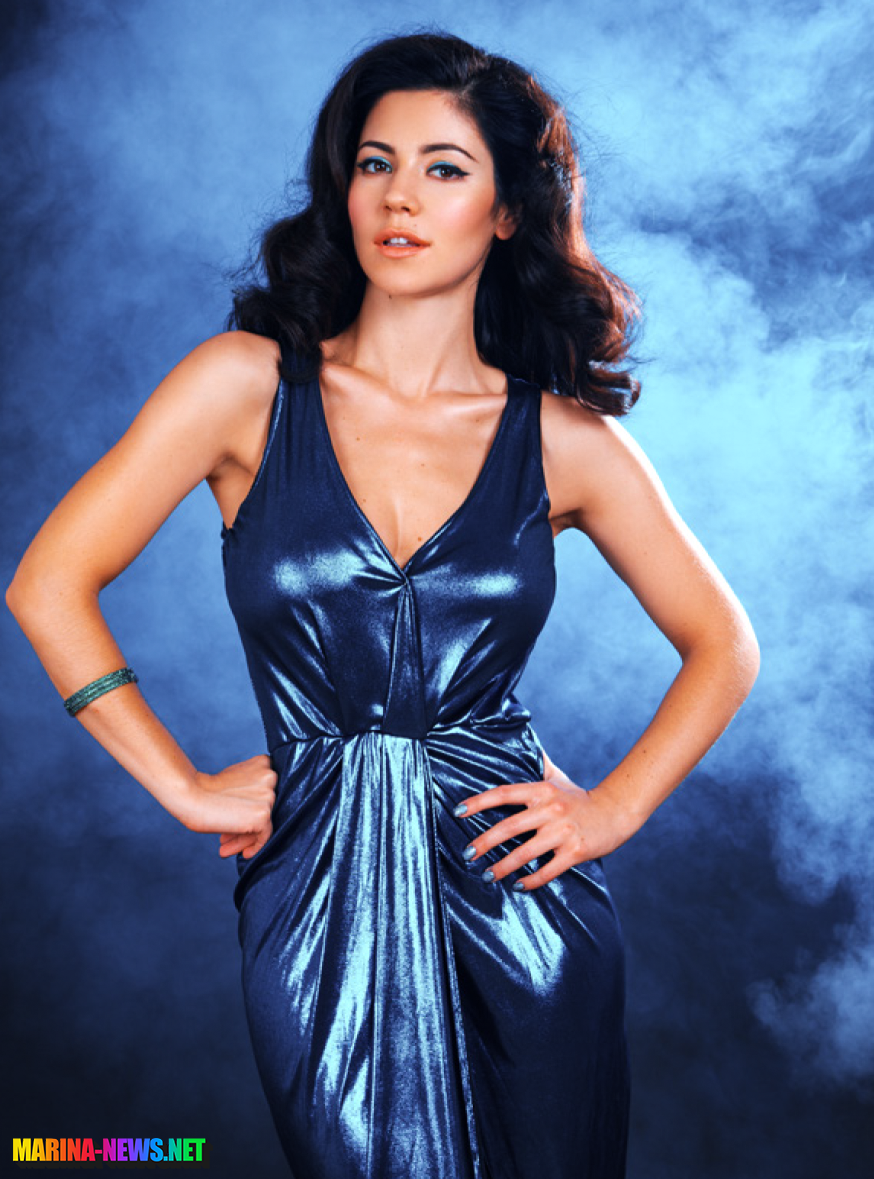 What are your plans for the future?
In terms of my career I feel quite relaxed at the moment. I would like to do other things, outside of songwriting and performing. I don’t value it enough to forever be chained to touring, needing this kind of popularity. I really appreciate what I have and I like what I’m doing now, but I don’t know if in 10 years I still want to have this lifestyle. Maybe I’ll always need to write but let’s talk in 10 years.


Is there anything aside from music you want to do?
Acting, I do want to explore that. I think if you have that theatricality in you, then it could be something interesting. I always had a sense that I should try it.

You can buy the MATERIAL GIRL issue 28 here 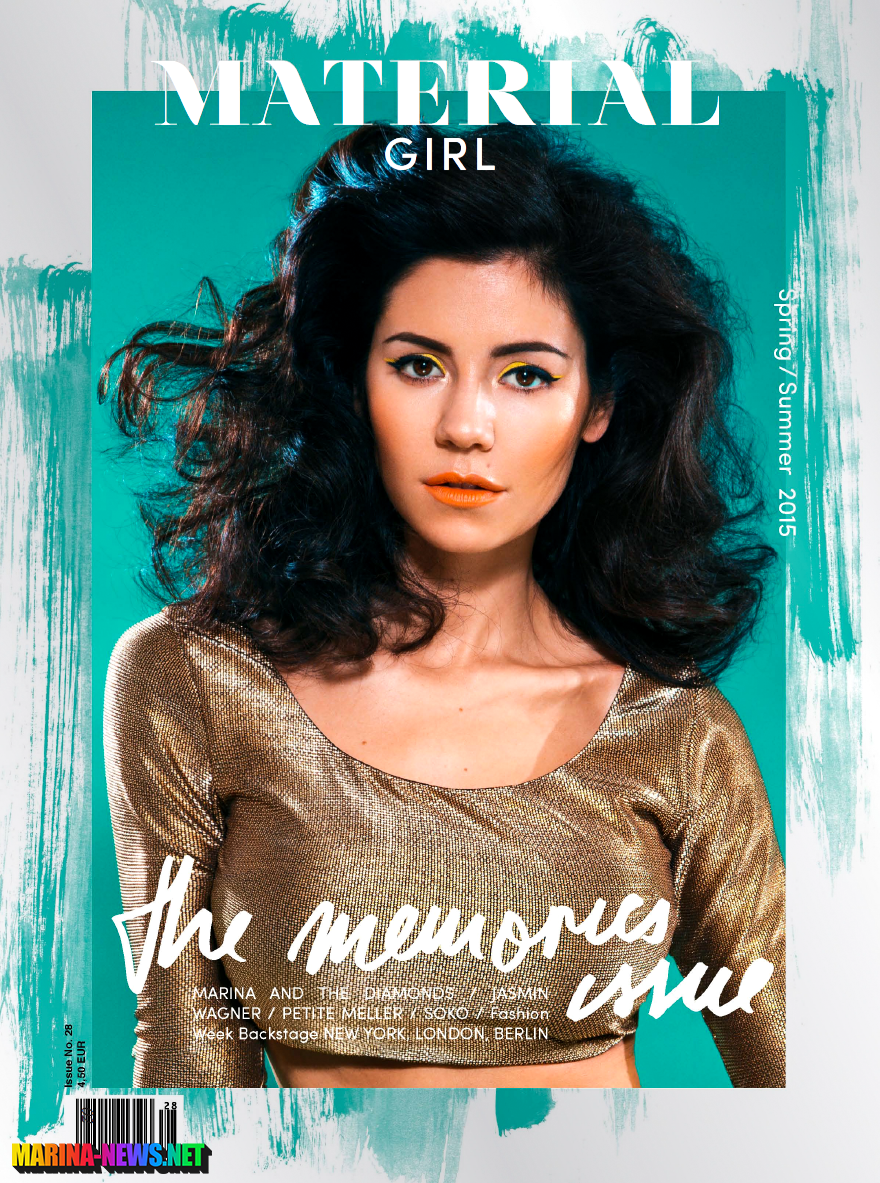