The enigmatic artist speaks to Attitude about her latest album FROOT, writing her own music, not pandering to her gay fanbase and why she's adamantly opposed to Jay-Z's Tidal Streaming Service.

Marina Diamandis, more commonly known as Marina and the Diamonds, has quietly established herself as one of Britain's most unique musical exports following the release of her third top ten album, FROOT, earlier this year. The 29-year-old Welsh beauty has used pop music as a platform for exploring a wide range of complex topics from heartbreak to narcissism to identity and she complements it all with a remarkable and distinctive aesthetic. We catch up the artist to discuss this plus her thoughts on today's music industry and her tour.

The artwork for the new album FROOT is beautiful colorful, what was the brief for that?

The angling of fruit. that wasn't really in until the last minute. I didn’t actually think we'd have fruit involved because it was too obvious. But it worked out well. In terms of the actual aesthetic and photography. I had originally gone to my first test shoot and I'd given them the brief of sort of a Dolce Vita image but in a digital, futuristic way. So we started off with that, using very classic, feminine references from the 50s and 60s - mainly 70s for hair - and then applying that in our own way and creating something new with it. For me it's always about taking something old and then reinterpreting it in a way that is both culturally relevant now and relevant to how I want to look as well as what I think. The visuals very much play into the lyrics so it all comes together as a whole experience.

It was like that with the last album as well. with the blonde curls and beauty mole...

Yeah, definitely, and even to reflect on what was going on that time l think the wig thing was necessary, because that's what pop stars did and that's what they do and that's what I was trying to do. Pop music has always been about embodying a caricature.

In terms of the music, is it fair to say FROOT is a bit less pop than Electra Heart?

Yeah. I think with Electra Heart I really wanted it to sound like a contemporary pop album. With this one I'm just really thirsty for a natural, human sounding record, so that's why I got a live drummer in and started to have live guitars on it. It still has a little bit of electronic production included but way less than I'd had on the previous album.

You recently told the BBC you find it weird that you’re one of the only pop artists out there who has written your whole album by yourself: Why do you think co-writing bas become such a standard thing?

What I have seen happen is that labels make less money these days, so for them they want to decrease their risk of losing money as much as possible. They think that it's going to be less risky to put artists that they’ve signed with co-writers, or producers who are already very established. So someone like Dr. Luke completely monopolises the radio in America. There's a huge demand for him because labels want a very sure fire way of having success. I mean you can't blame him from a business perspective. and it's not that co-writing is a bad thing, but I think it has definitely changed where we’re at culturally on a song writing level. It’s weird for me to be one of the only artists who has actually written an album. I just think there's something kind of wrong in that. That’s why I really like discussing it because for artists reading this, or people in the industry even, there’s suddenly an awareness of it and an acceptance of it. I’m always encouraging people to write on their own. When I‘m co-writing I’m still writing everything except for doing the production, so it’s still completely me, but with co-writing it's almost like you're writing with someone peering over your shoulder. You’re more self-conscious, and you might not include the things you would if you were writing on your own.

Does radio still hold a grip on bow your music will perform, in terms of getting airplay - is that still important?

For sure. I mean with FROOT when I first went in they were like ‘Well what are we going to do with it because it's not going to go on radio’. And I was like well, ‘I have a little plan and it's called Froot of the Month.’ [Marina released the album slowly over a period of months] So I kind of devised that strategy in order to skip that whole process because I just didn't think it was appropriate for what I was doing. And it’s always nice to get radio play but you don’t need to gear your career around that. Radio's still quite powerful but I think now they’re very relaxed with me. I think they understand what my fan base is like and have just left me to my own devices.

How do you see the future of people consuming music?

I don't know, because for example with Froot of the Month, you can only do that once. And by the time I have the next record out, I don't know if that's going to be two years or five years, and by then things may have changed. But I think the main way in which fans consume music is through the live shows and that's the most important thing for me.

What’s the live FROOT show going to be like?

It’s called the Neon Nature tour, and it's coming along nicely, I'm planning it now. Basically, we’ve built a really surrealistic electric garden on stage with like massive blow-up fruits in really weird colours and I suppose it's playing on taking something that's natural and adding on something artificial.

You were one of the few artists who spoke quite critically of Tidal on Twitter, after the big launch. Are you surprised it flopped?

No. Even though I don’t want anything to go badly, especially with that because I know initially they probably thought that what they were doing was a really good idea, but it just ended up being something different. I’m kind of relieved that it hasn't worked because it shows that people are intelligent and won’t just buy into something because of celebrity.

Do you think that something like that might have a bit more leg if it was a bit more collective, lots more artism, smaller artists?

Definitely. If it was sold to people as a co-operative and you had all types of artists in there. so you had for example Everything Everything, Bat for Lashes, as well as Madonna and Rihanna, you know, a huge mix of bands big and small. you’d then get the support of every music fan because they'd be like ‘I'm doing this because I support artistry and music whereas it was just sold as something completely different and unrelatable, and at a premium cost. So, yeah. I wasn’t really surprised but it's a shame because it could be something really good. I suppose the opportunity is still out there.

Now you do have quite a big gay following, but you said recently to the Huffington Post that it’s not something you play up to, or contrive. Why do you feel you've assumed an LGBT fan base nonetheless?

I don’t know, I'm not sure. I think I definitely noticed an increase with Electra Heart, and I don’t know whether it was because I was doing an album that was really theatrical, really pop, really colourful and visual that people respond to that or if it’s something more to do with the lyrical side which has in the past focused a lot on identity and feeling discriminated in some way, so perhaps that's something that gay and lesbian people can relate to. I’m not really sure. What do you think?

It was Electra Heart that brought you to my attention, and I think it was a combination of the imagery, the lyrics, but also Primadonna was just a real banger that grabbed everyone’s attention. It’s quite an American thing, isn’t it, to ham up the whole ‘I love my gays’ thing?

Yeah, it’s kind of interesting that the quote got picked up on because I didn’t mean it in a bad way at all, it’s more just being truthful. I just feel like a lot of people kind of dumb their fan bases down and we don't really need to be dumbed down. Sometimes when you see how people cultivate their gay fan base and kind of give them extra attention and have to almost massage them, I just think there’s no point in that, because all your fans are the same. Of course, if I'm speaking truthfully, I love having a gay fan base because - quite frankly it makes the shows really fun, really expressive and for some reason our personalities go together very well, but I always find it weird to separate a gay fan base from a straight fan base. We’re all the same at the end of the day.

Do you think in today's world of social media, fans feel a bit too much ownership over you? Last month Jessie J unfollowed some fans on Twitter and they turned on her quite viciously...

I think it’s just down to the fact that a lot ofher fans are probably quite young. you know, they feel very dramatic and when you’re 14 years old, Jessie J unfollowing you is a really big thing and so you will respond unkindly. But in terms of ownership, I'm not sure if that’s ever changed since the 80s or, you know, the 70s, whenever people started becoming massive music fans. I think it’s just so visible on Twitter and it's so immediate and everyone can have their say and express how they feel.

Do you think you’re someone who is more concerned with artistry than fame?

I think you live the life that you want to live and I think in most cases, certainly with things like fame, I think you decide what happens to you. In some you don't get to decide but I think with a lot of celebrities, going to certain places and making sure you're seen in certain places is a choice, so if you don't ever want to be recognised, then disappear off the face of the earth, it's pretty easy for that to happen.

How will you measure success for FROOT?

I think with how happy you feel, and I do feel happy. I feel like my work has been understood and that makes me feel really satisfied. So I think it’s connected to satisfaction as opposed to anything else.
Marina’s new album FROOT is out
now. marinaandthediamonds.com 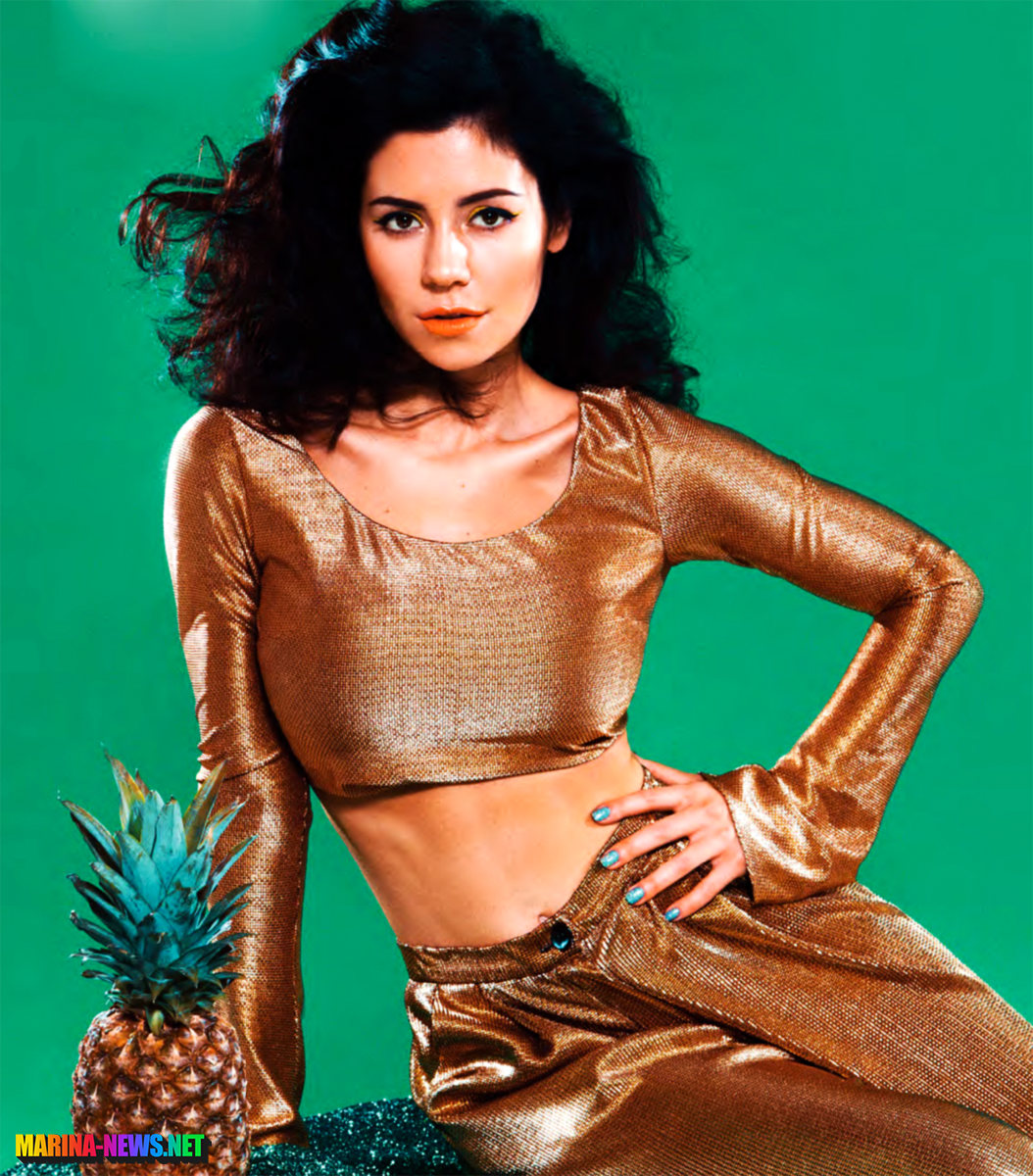