“This one feels different,” Marina Diamandis (aka Marina and the Diamonds) said, during a brief pause in her 3-song acoustic set promoting her third album Froot, due out on April.

She performed to a rapt audience on a make-shift stage festooned with grape leaves and bright fake fruit at the Atlantic Records offices yesterday. She continued, “This one is very important to me. I’m sure everyone says that about all their albums, but it’s very true for me right now.”

It’s clearly a very personal endeavor. Marina wrote all twelve songs on the album, and co-produced them all with David Kosten, better known as Faultline, long-time producer for Bat for Lashes and Animal Kingdom. To date, three songs have been released from Froot — the delectable title track, “Immortal” and “Happy,” with three more coming in the next two months.

Marina kicked off with a pitch-perfect rendition of “Happy,” solo at the keyboard. The delicate sweetness of the track came through in her vocals, her first live performance of the song. She popped up at the end (“now I can relax!”), a bit relieved to welcome a guitarist for accompaniment on “Forget” and “Froot.” She then previewed album tracks for two more fantastic songs, “I’m a Ruin” and “Blue.”

The album sounds much in the vein of her previous two records — lush, multi-layered, and pop-tastic — but with a distinctly optimistic tone. On “Blue” she sings over an insistent, effervescent beat, “I don’t want to feel blue.” Watching and listening to Marina, it’s hard not to catch her infectious mood. We’re counting the days until April 7th. 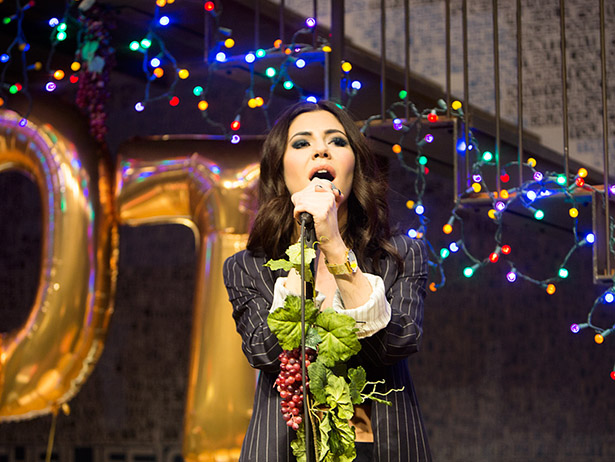